All roads lead to the G-Spot 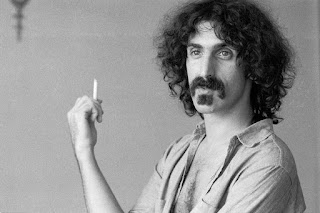 Every year, when the prospectus for the upcoming season of The Philadelphia Orchestra arrives in the mail, I leaf through it, looking for a program or a particular piece to get excited about. It rarely happens anymore. The big orchestras, especially on the East Coast, have become increasingly reactionary over the past few decades. I'd even go out on a limb and say Yannick Nezet-Seguin's repertoire is more limited than Eugene Ormandy's.

To maintain my interest in live music, I rely on chamber groups and ensembles like Orchestra 2001, which, under the leadership of the young and amiable Jayce Ogren, presented a pair of programs last week that I swear were put together specifically with me in mind. On April 22 and 28, the group celebrated the 25th anniversary of the release of Frank Zappa's Yellow Shark album, the last disk the composer issued in his lifetime.

The April 22 program, titled "Zappa's Radical Classical Roots," was held at World Cafe Live and focused on Zappa's musical heroes, with works by Edgard Varese (of course), Pierre Boulez, Stravinsky, and Anton Webern, as well as three brief selections from "The Yellow Shark."  The April 28 concert, at the Fillmore Philly, presented the (almost) complete Yellow Shark. (Three pieces from the album, improvisations worked out by Zappa and the Ensemble Modern, have not been approved  for performance by the Zappa Family Trust.) The second event was also preceded by a rare treat: a reading of Varese's Ionization for percussion, which I'd never heard live.

Both performances were uniformly outstanding. The musicians of Orchestra 2001 rose to every challenge the 20th-century avant-garde could throw at them. Of the two, however, I would say the first was the more deeply satisfying. The music Zappa wrote for classical musicians, or for the Synclavier, as attractive as they can be, often lack the cogency of "L'histoire du soldat" or "Density 21.5." Pieces like Times Beach II and III feel like fragments of larger works. They don't so much begin and end as they seem to materialize out of  nowhere, linger in our plane of reality for a few minutes, and then vanish. The most successful of the lot were, for me, "None of the Above" for  string quintet, in which the bravura lines for the first violin create an arresting point of focus, and "Ruth Is Sleeping" for two pianos, largely because Stephanie Ho seemed to be having such a ball.

But then there was "G-Spot Tornado," the wild (and aptly titled) Synclavier piece, arranged for small orchestra by Ali Askin, that brought the second evening to a sensational close. Ormandy used to say the most sure-fire concert finale is Brahms' Second Symphony, whose last movement is guaranteed to send the audience home with a jolt. "G-Spot Tornado" is in the same class. There is just no resisting it. Before the last crash of the gong had died down, the Fillmore crowd was on its feet, calling for an encore, which, sadly, it didn't get. The piece has stuck in my head ever since.

All hail Ogren and Orchestra 2001 for a pair of memorable performances. Thanks, too, to Joe Klein, professor of music at the University of North Texas, who spoke at both programs. Klein teaches a course on Zappa and was billed in the programs as a "Zappa expert," a title he said he didn't fully deserve. His classes are full of Zappa experts, he said, and the audiences in attendance at last week's programs probably also had their share. He was right. The pre- and post-concert chatter each eveninng was impressively well-informed. The second night's crowd seemed particularly devoted, with some audience members traveling from as far as North Carolina and New York State for the privilege of hearing The Yellow Shark live.

I think I've heard more live Zappa in the 25 years since his death than I did when he was alive. With the dedication of groups like Orchestra 2001 and Andre Cholmondeley's Project/Object, his legacy seems secure for the foreseeable future.
Posted by Joe Barron at 3:24 PM

In some ways Zappa's strongest classical/modernist art music was written for the soundtrack of 200 Motels.

I listened to the Los Angeles Philharmonic's CD of the orchestral portions of "200 Motels," and I have to say I missed the contributions of Eddie & Flo.