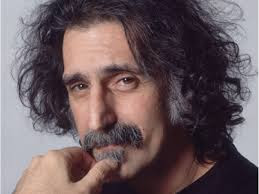 Yesterday afternoon I went to the movies for the movies for the first time in years. The feature that, at long last, lured me out of my apartment on a weekend was Eat the Question: FrankZappa in His Own Words, a documentary by Thorsten Schütte. (Leave it to a European ― in this case, a German ― to remind Americans of their own musical heritage. It took a Dutchman, Frank Scheffer, to film Elliott Carter. )

The film consists of snippets of TV interviews Zappa gave over the years, interspersed with performance footage, presented more or less in chronological order. There is no narration, no subtitles identifying the interviewers or band members. Viewers are left to navigate the timeline on their own ― you can estimate when a scene was shot by the personnel, the repertoire, and the length and color of Frank’s hair ― and it seemed to me that the more you bring to the film, the more you’ll get out of it. I wondered if anyone who had never heard of Zappa would have any idea what was going on, but then, anyone who had never heard of Zappa would never pay the teen-dollar admission price.

(The private Zappa, as we are learning from his daughter Moon, was not such a bastion of integrity. For one thing, he was an open, serial adulterer who once gave his wife the clap. In the film, he has a few things to say about groupies, as well as the clap, but his wife and children are never shown on camera.)

Over the years, interviewers are constantly struggling to reconcile Zappa’s outrageousness with what they call his “serious” side, though he insists he approaches all of his music seriously. A piffle like “Valley Girl” and long-form compositions with the London Symphony Orchestra, he says, both present problems in musical form. In an early interview, we see him in his studio, editing a score with a razor blade, and talking about his ambition to become the missing link between Varese, Stravinsky and Webern. (Carter attempted much the same synthesis, with more success.) Years later (as indicated by the hair), he defines his aesthetic, a favorite word, as “anything, anywhere, anytime, for no reason at all.” His music, he says, embraces all styles. It contains both complex and simple rhythms, both dissonances and triads ― an openness that puts him more in the tradition of Charles Ives, if Ives can be said to belong to a tradition.

The portrait that finally emerges, almost incidentally, from the nonstop polemics is of a man who loved music for its own sake, and I think Schütte deliberately chose the last shot in the film to reinforce the point. Frank, grizzled, dying of cancer, stands lighted against the darkness and, with c
concise, weak strokes, conducts an unseen percussion ensemble in “Ionisation” by his beloved Edgard Varese. His eyes are closed. For the only time in the film, perhaps the only time in his life, he looks to be on the verge of tears. He didn’t believe in heaven, and neither do I, but here he is as close to it as he ever expected to come.

Music is the best.

Note: The title of this post was overheard in line at the box office at the Ritz Theater. The words were spoken by the white-haired woman standing in front of me. She was in the company of a man who, downstairs as the concession stand, asked for a pair of headphones so he would hear the movie better. What starker reminder of  the passage of time? Zappa has been dead for more than 20 years, his first album was released 50 years ago this month, and the youth who rebelled in the ’60s are now collecting Social Security.
Posted by Joe Barron at 1:31 PM No comments: