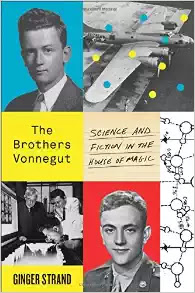 One of the few nonfiction books I’ve bothered to read this year is The Brothers Vonnegut: Science and Fiction in the House of Magic by Ginger Strand. Not quite a full dual biography, it's more an examination of the parallel careers of Kurt Vonnegut and his older brother, Bernard, in the years following WWII, when they both worked at General Electric in Schenectady, New York -- the House of Magic of the title, Here Kurt wrote copy for  the publicity department (known pretentiously as the News Division) while Bernard conducted experiments in cloud seeding. In this period, as in their childhood, Bernard was the star of the family, a bona fide scientist who followed the path set for him by his father and uncles. Kurt was the overlooked kid brother, a college dropout, the family clown who sent story after story to slick magazines and amassed stacks of rejections slips.

The central section of the book flips back and forth between the brothers’ working lives in the late forties and into the fifties, and Bernard’s story is far more absorbing. The descriptions of Kurt sitting at his desk and pounding out prose become repetitive. Bernie, meanwhile, flies off in B-17s and makes rain with silver iodide (maybe). It isn’t until the last fifteen pages of the book that the roles are reversed, and Kurt becomes the dominant figure.

In Strand’s telling, the years in Schenectady bore most directly on two of Kurt’s novels: Player Piano (which disappointed me) and Cat’s Cradle (which didn't). The description of Ice-9 in the latter is taken directly from Bernie’s explanation to his brother about the different ways in which water may crystallize:

He told Kurt to imagine cannonballs stacked on a courthouse lawn. Just as the balls could be piled up into different shapes, ice crystals could be stacked into different configurations. In fact, [Percy] Bridgeman had described a whole series of ice phase variants, ice-1 through ice-6. And who knew—there might be more to come. (95)

Strand’s book also provides a valuable portrait of the GE corporate culture in those years. The company was then, as now, a central cog in the military-industrial complex, and it demanded not only the time and talents of its employees, but their political sympathies as well. And the sympathies were decidedly right-wing. (It was GE, she reminds us, that launched the political career of Ronald Reagan.) Kurt loathed the atmosphere, and got out soon after selling his first couple of stories. Bernard grew disillusioned over time – rather too much time, it seems – and escaped into academia.

Last aside: In Person of Interest, the sci-fi/action series that concluded its five-year run on CBS this month, the virus that finally destroys the evil computer is called Ice-9. I was tickled to hear that.

Posted by Joe Barron at 1:56 PM No comments:

Final thoughts about the Doubleclicks

This will in all likelihood be my last post about Aubrey and Angela Webber, the maddeningly talented sisters from Portland, Ore., who tour and record under the name of Doubleclicks. For two years I’ve been trying to sell my friends on their music, and with one exception, I have failed.  The fault may lie not in our stars, but in our demographic. Most people my age, I guess, aren’t interested in geeky songs about dinosaurs, TV shows and tabletop games – never mind the appealing musicality or the memorable, singalong lyrics. This duo isn’t too young for me, because I never stopped being a geek, but it seems to be for my pals.

Bitterness aside: Angela and Aubrey performed Sunday night at the newly reopened Steel City café in Phoenixville. It was their third appearance in the Philadelphia area in as many years, and it made up in energy and wit what it lacked in new material. Despite some problems the sound system, and Angela’s trouble with the tuning on her guitar (she hates summer, apparently), a splendid time was guaranteed for all. The sisters were in top form vocally, most memorably in the bouncy “Unstoppable Force.”

They’ve been touring the country for the past week, and the long-distance driving seemed to have taken a toll. They didn’t appear weary so much as punchy: Angela would launch into rambling intros, only to have her sister pull her back from the brink. At one point, a song came to a dead stop as Angela retuned and asked for the sound to be brought down.  Like all real pros, however, they turned the trying circumstances to their advantage, milking them for laughs.

Afterward, Laura Vernola, one of Steel City’s new owners, told me that of all the acts booked there since the coffeehouse reopened, the Doubleclicks were the most sheerly entertaining.
Still, as funny as they are, though, they always manage to put a lump in my throat. Sunday, the lump was planted by “Wonder,” “I’ve Got Nothing to Prove,” and their touching cover of Jimmy Eat World’s “The Middle,” a song its creators never intended to be touching.

One last observation: As I was driving home, nervously watching the temperature gauge on my dashboard, I had to wonder how the act will change in the next few years.  Aubrey turned thirty last year, and Angela will in 2018, I believe.  In the near future, I thought, they will have to stop writing songs about growing up and begin to write about what it is like actually to be grown up. They might need time off to reassess, as Garry Trudeau did, before they were born, when he went on sabbatical and brought his Doonesbury characters into their post-collegiate lives.  But they are inventive musicians and observant lyricists, and I have no doubt they’ll handle the transition without letting the seams show

Maybe them my friends will pay attention.
Posted by Joe Barron at 8:53 PM No comments: