Upcoming concerts in and around Philadelphia

The Philadelphia Singers will present a program of Amiercan choral music in Paoli and Philadelphia the weekend of Oct. 27. Highlight for me will be Carter's two Dickinson settings from the 1930s and '40s. Read my interview with choral director David Hayes.

In another (for me) exciting development, the Southeastern Pennsylvania Symphony Orchestra will present an American program Nov. 17, which I will also write about in due course. The concert will include Barber's Adagio for Strings, which is a bit of a snooze at this point, but the other works on tap more than make up for it: Barber's Knoxville, Copland's Clarinet Concerto, and Ives's little Third Symphony.
Posted by Joe Barron at 3:18 PM No comments:

I read in a blog post that Charles Ives's Fourth Symphony was recently performed in Berlin with an all-star cast that included Ingo Metzmacher, Pierre-Laurent Aimard and the whole gleaming Berlin Philharmonic. Berlin, for heaven's sake. Hitlerville.

Still no word on when, if ever, it will be played in the birthplace of America.
Posted by Joe Barron at 1:51 PM No comments:

Saturday I covered a robotics exhibition at Mount St. Joseph Academy, a girls' school in Flourtown. The name of the student's robotics team is the Firebirds. I had to ask, of course, and no, none of the girls had ever heard or heard of the ballet. I wrote down the information and handed it to one or two of the students, suggesting they look it up on youtube, but it made me uncomfortable. I didn't want them to think of me as one of those creepy old guys who hang out in schoolyards and talk to underage girls about Stravinsky.

In case you're wondering, the team name has nothing to do with the ballet. A Mount sophomore told me it was inspired by an incident in the late 90s when a robot caught fire. The team then rose from the ashes, she said, which suggested to me that the name should have been the Phoenixes. I am happy they made the wrong connection.
Posted by Joe Barron at 6:03 PM No comments:

You want to know what ticks me off about the Philadelphia Orchestra?

I can sum it up in two words: Alisa Weilerstein.

Alisa Weilerstein is a cellist (and one of those classical string babes) who is about to release this CD: 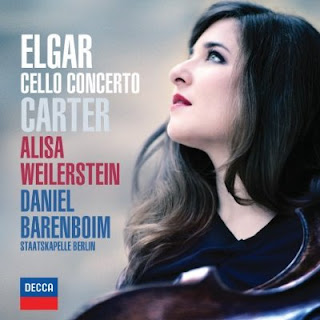 As you can see, the CD will contain the concertos of Edward Elgar and Elliott Carter. It will be the third recording of recording of Carter's wonderful concerto. I have preordered it at Amazon. It is scheduled to be released at the end of the month and will be my 55th birthday present to myself.

Now, Alisa Weilerstein is slated to appear with the Philadelphia Orchestra at the end of December. She will be playing one of these two concertos. Guess which one. Go ahead. Guess.

Now, after 35 years of following the orchestra, waiting and hoping to be thrown the occasional bone, I have managed to make other arrangements other arrangements to satisfy my modernist jones. You have to, really. Once in a while, though, the frustration of missed opportunities returns to slap me in the face.
Posted by Joe Barron at 5:54 PM No comments:

The greatest music blog in existence

Thanks to John Schott for sending the link. As he says, the postings have fallen off, but Mr. Carter is a busy man, and as old as — !
Posted by Joe Barron at 2:38 PM No comments:

And I had to speak French

Last Thursday, Oct. 4, I interviewed both Yannick Nézet-Séguin, the incoming music director of the Philadelphia Orchestra, and soprano superstar Renée Fleming for a preview of the season opener coming up next week. You can read all about it here. I will add only that both Yannick and Fleming were relaxed and chatty, which went a long way toward making me feel the same way.

At the end of my 25 minutes or so with Yannick, I told him I could not let the opportunity pass without making a request. He chuckled and told me to go ahead. I told him my favorite composer is Charles Ives — “Oh!” I heard him say — and the one symphony by Ives the Philadelphia Orchestra has never played is the Fourth. (It has played the first three, plus the two orchestral sets and the Holidays, but never the Fourth. It also has never played the Robert Browning Overture, but one step at time.)

He seemed surprised by the fact, and he said he would take the suggestion seriously. He has already met with management to discuss major works that do not yet belong to the orchestra’s repertoire, he said, and the Ives should be added to the list. So who knows? Maybe in another couple of years. I told him that if he does schedule the piece, I would attend every performance, which also seemed to amuse him.

In my first attempt to phone Yannick — at home in Montreal — I got the wrong number. A woman answered, and since Fleming, whom I spoke to earlier, had screened my call (someone named Paul answered), I assumed the maestro was doing the same thing. The woman sounded elderly, and for a second I thought maybe it was his mom.

I asked to speak with him, and she said, “Comment?”

So, reaching back to my high school French, I said something like, “Je voudrais parler avec Monsieur Nézet-Séguin.” She mumbled something I didn’t understand, and the line went dead.
Posted by Joe Barron at 1:16 PM No comments:

AND TWO PLUS TWO STILL EQUALS FIVE
Posted by Joe Barron at 11:34 AM No comments: