Ace Atkins has written a fourth novel in his continuation of Robert B. Parker's Spenser franchise. This one is called Kickback , and it's based directly on the kids-for-cash scandal that played out a few years ago in Luzerne County, Pa., my proud home state.

(About that title: toward the end of his life, Parker skimped on his prose. The page count stayed the same, but the type got bigger, the margins wider, the leading deeper, and the titles were mostly reduced to one word. He seemed to be a race against time. The hireling author has filled out the pages again, but he has turned bi-syllabic titles into a tradition.)

Of  Atkins' attempts to inhabit the Spenser universe so far, this is the first  one that doesn't fall apart at the end, although he does feel the need to introduce organized crime into the story, the one element not drawn from real life,  just to he can set up an obligatory bloodbath. Just once, I'd like to read a Spenser novel in which goons are not sent sent to scare the hero off. The crime bosses never seem to realize that if they just left him alone, he'd have no leads to track down.

As with the last Spenser book, I couldn't help thinking about Spenser's age, which is never nailed down numerically, but which has to be over 80. Parker, who used element his own life in fashioning the character, was born in 1932, and Spenser was already in his forties when he was introduced in 1973. Do the math. Our urban knight errant is now dealing with a reconstructed knee, and he's gone on a diet, cutting out his beloved donuts (though he'd lose weight faster if he stopped drinking). Barring a complete reboot a la Star Trek, he'll soon be breaking down doors with a walker.

What drove the age issue home most forcefully, however, wasn't Spenser's physical condition, but his cultural references, which seem stuck in a time warp. Parker had a lazy way of describing characters, especially women, by comparing them to celebrities of the day, but at least the names he used were of the day. Atkins reaches back into the pop culture past, as though he knows he's writing for an aging demographic.

But to be fair, he's writing about a character who still listens to Artie Shaw and wears a Brooklyn Dodgers cap.

Here are a few examples, with page references. See how many you recognize.

A haggard woman missing two front teeth got up to slow dance with a man in a flannel shirt and unlaced boots. They could have taken a lesson from Arthur Murray. (44) Is that even around anymore?

The hood lay loose around his neck, making him look like Nanook of the North. (44)

All this sleuthing was exciting as hell. If only Bulldog Drummond had the Internet. (75)

Only myself an Warner Oland could sleuth over a plate of scallion pancakes. (78)

"I know you," I said, snapping my fingers at the old guy. "You were in the Mickey Mouse Club. You, Chubby and Annette. Wow. Brings back some real memories." (121)

He looked about as menacing as Howdy Doody on a buckboard. (186)

His thick, curly hair had been cut shorter than Daddy Warbucks's. (232)

I waited for the purse to clock me with all the ferocity of Ruth Buzzi. (245)

He looked like a young James Caan without the looks. (290)

There was also a reference to Madonna in there someplace.

A lovely Sunday afternoon in the wilds of suburbia

Here is a link to my article on the Salon Extrordinaire, a public but informal get-together organized on occasion by the composer Andrea Clearfield. The Salon will be held this Sunday, and it's free.

I had not heard of the Salon, and I had not heard of Andrea, but after interviewing her, I was glad my editor threw the story my way. She is currently working on an opera, she tells me, with a libretto by the playwright Jean Claude van Itallie, author of America Hurrah and Mystery Play, which I acted in a few years ago..
Posted by Joe Barron at 11:09 PM No comments: 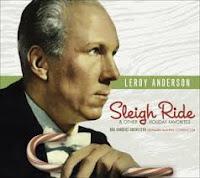 I've said in the past that Christmas isn't Christmas until I've heard Leroy Anderson's "Sleigh Ride," and on the condition that hearing it must be as close to accidental as possible - such as over a store's loudspeaker, or in a TV commercial. Radio does count, even though one Philadelphia station plays Christmas music for a month, and hearing "Sleigh Ride" is inevitable if you tune in for any length of time.

Today, I was pleased to discover that the tunes means as much to the young musicians of Plymouth Whitemarsh High School, in Whitemarsh, Pa., as it does to me. The concert band plays the piece ever years at its winter concert, and the band members apparently regard it as a rite of passage. Digital first's own  M. English has written an lively, informative article on the students and their relationship to the music, and I must say I'm jealous she beat me to the story. You can read it here, and I suggest you do.

By the way, my first exposure to "Sleigh Ride" this year a couple of weeks ago, before Thanksgiving, when it was broadcast over the TV in the newsroom. I forget which station. It might have been CNN, which would prove that even a network as fatuous as CNN is good for something.
Posted by Joe Barron at 11:00 PM No comments:

The New Colossus - a footnote

With apologies to Emma Lazarus:


The Woman with the torch looks out to sea
And tells the world, "I'm changing my criteria.
Send all your homeless, tempest-tossed to me,
Unless they come from Mexico or Syria."