In an earlier post, I referred to Florence Foster Jenkins, portrayed my Meryl Streep in the eponymous film, as a horror. Now,  however, the blog Voice Science Works has defended her, or at least her right to sing, because of her enthusiasm and her love of music. "Do we want a world where only a few will sing due to social  pressures," the blogger asks, "or one where we all understand that our voices have enormous potential should we seek to find it?"

Personally, I'd go with the social pressures. Ara longa, perhaps, but vita is too damned brevis to put up with incompetence, let alone encourage it. I wouldn't want to waste my time on an execrable singer any more than I would on a juggler who keeps dropping his clubs. Performance might benefit from passion, but it also demands skill.

And yet ... the blogger's defense reminds me of a passage from the Memos of Charles Ives, whose music I have loved since I was a kid and whose ideas have been an ever-present challenge: 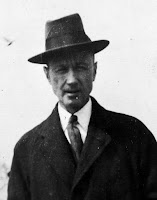 Once a nice young man (his musical sense having been limited by three years' intensive study at the Boston Conservatory) said to Father, "How can you stand to hear old John Bell (the best stone-mason in town) sing?" as he used to at Camp Meetings). Father said, "He is a supreme musician." The young man (nice and educated) was horrified -- "Why, he sings off key, the wrong notes and everything -- and that horrible, raucous voice -- and he bellows out at hits notes no one else does -- it's awful!" Father said, "Watch him closely and reverently, look into his  face and hear to music of the ages. Don't pay too much attention to the sounds -- for if you do, you may miss the music."

Ives spent much of his creative energy trying to capture the spirit behind the sounds, and, looking at the joy in Streep's face as she butchered "Der Hölle Rache kocht in meinem Herzen," I had to ask myself, have I been missing the music? Is Florence Forster Jenkins the embodiment of the Ivesian ideal of substance over manner?

On this occasion, I'm going to comfort myself by saying no. In the first place, Florence would have hated Charlie's music, as well as his idea that dissonance can lead to higher truth. At the end of the film, we hear her as she heard herself, and in her own mind, she sang like an angel. Earlier, when pianists are auditioning to be her accompanist, we find she can't bear loud, aggressive playing, though her sensitivity was likely a symptom of  her lifelong syphilitic condition. Volume and aggressiveness were, of course, staples of Ives's repertoire  -- as was humor, and while Jenkins's listeners might feel free to laugh, she took herself seriously.

Ives also would have despised Jenkins's choice of material, which for him typified the easy, spiritually bankrupt world he was rebelling against. For Ives, a man singing a hymn off key is channeling God. A woman singing Mozart, no matter how well, is just singing Mozart.

(Zappa, I think, would have loved her, just as he loved the Shaggs, who he insisted were better than the Beatles. But for Frank, wrong notes weren't about the music of the ages. They were about the subversion of information.)

Over the years, hostile or condescending critics have leveled the same charges against Ives that some reviewers leveled against Jenkins -- amateurism, sloppy technique, and the use of wealth as a buffer against reality -- but right or wrong, Ives was an artist, and a skilled one. His dissonances have purpose, often to wonderful effect, and whatever spiritual vision his scores possess comes though more clearly and forcefully through -- dare I say it? -- a good performance.
Posted by Joe Barron at 1:38 PM 3 comments:

I read a lot of trash in the summer 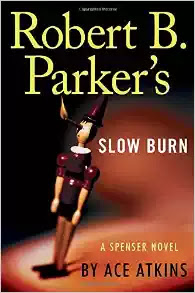 Spenser is back, busting the bad guys and overeating, in Slow Burn, Ace Atkins' fifth attempt to extend Robert Parker's deathless franchise. It's his best effort so far, though it can't avoid some of the series' more glaring cliches. In one twist, Spenser, who is gradually showing his age more and more, gets the worst of it in a fistfight with a young thug in the employ  of the mob. Atkins plants the seeds for the next book, leaving open the question of a rematch, and just when the mob boss Spenser has ticked off will try to bump him off, but I left wondering why the mob boss would wait until Hawk comes back from France to make his move.

The novel is apparently based on a real-life series of arsons that took place in Boston in the 1980s. In Atkins' telling, the arsonists are a trio of pathetic firefighting wannabes who think causing a crisis will create more support for the fire department. Atkins resorts to Parker's old technique of inserting italic chapters told from the perps' point of view, which gets the miscreants into the story long before our knight errant catches up with  them in the last couple chapters. I've never liked this device. The books are supposed to be told from Spenser's point of view, and the shift in perspective has always struck as an authorial intrusion.

Spenser gets into the case, of course, because an angry, loudmouth firefighter doesn't think the higher ups are doing enough to solve the case. He asks Spenser to go through the back door, tracking down underworld contacts the arson squad wouldn't know about. Strangely, this approach is nothing but a a red herring: Spenser's initial theory of the case turns out to be wrong, and all he manages to do, at first, is get the mob boss mad at him.

Parker was an efficient writer, not a great one. He didn't have Chandler's style or Hammett's way with a plot. His prose is never memorable. But he was often diverting, and sometimes funny, and he excelled at gunplay (which is why his best books are his westerns). Atkins falls comfortably into the formula. It seems he'll be able to churn out a novel every year until Spenser turns 100.

And he's still taking the easy way out with his character descriptions, making comparisons to minor celebrities of the past. This time out, he tells us one guy resembled Fred Gwynne without the bolts in his neck. There's an esoteric reference for you. If nothing else, Atkins knows his demographic.
Posted by Joe Barron at 2:03 PM No comments:

The inspiring true story of a real-life horror

I don’t go to the movies much anymore, but on Sunday, with the heat index at over a hundred degrees, I forewent my usual weekend bike ride and spent the afternoon in an air-conditioned theater. I saw Florence Foster Jenkins, Stephen Frears’s comedy-melodrama about the heiress who became the worst singer ever to perform at Carnegie Hall, with Meryl  Streep in the title role.  This isn’t a review. There are enough of those around. Suffice it to say there weren’t as many laughs as I’d expected. Simon Helberg, my favorite cast member in The Big Bang Theory, has a few amusing moments when, as Florence’s hired accompanist, he first gets a load of her vocalizing. For the rest of the film, however, he has little to do but complain he can’t risk his reputation by appearing in public with her, then relent every time because a) the money is too good and b) he grows genuinely fond of the old dame.

My problem, when I left the theater, was that I wasn’t sure how we are supposed to feel about Florence. Are we supposed to laugh at her? Pity her? Admire her courage? Is she a trouper or a fool? But now I think there is no wrong way to respond. Derision, empathy and outrage are all valid reactions, together or separately, and  that very ambiguity may be the point of the film. Truly, Florence is a horror who makes a mockery of Joseph Campbell’s counsel to follow your bliss. Most of us overestimate our talents, but few of us have the money to rent out Carnegie Hall and inflict them on the public. The music critic who, in the film, writes a devastating review for the Post might be depicted as a meanie, but he is right to be incensed.  The drunken sailors and soldiers in the audience who think the performance is a joke, a la Jack Benny and his violin, are right to laugh. And Florence’s supporters in the audience are right to shout them down. They don’t want to see her feelings hurt.

For all her wealth, Florence had a hard life, having been infected with syphilis on her wedding night at age 18. I should be glad she enjoyed her moment in the limelight, but I couldn’t really root for her. It made no difference to me ― and certainly not to music ― whether she finally summoned the moxie to walk out onstage.
Posted by Joe Barron at 12:25 AM No comments:

My own little slice of heaven

Friday, when Steve was finished with teaching, he brought his cello down to the lobby to practice. I was the only one of the newspaper staff who had not yet gone home, and so I was treated to a private performance, though much of it consisted of warmup scales and arpeggios.

Last year at a benefit concert, also held at the Centre Theater, Steve played one movement of Bach’s Suite No. 1 in G. Afterward, it seems, I teased him about it, asking him why he didn’t play the whole thing. I have no recollection of the incident, but Steve remembered, and he said he I was right. He felt guilty, he said, and to pay me back, he would play the entire suite right there in the lobby.

Well, you know, I said, my favorite of the Suites is No. 3, and which point he sat down and played it. He did it in fits and starts, since he was breaking in a new bow, but he did, eventually, get through the whole thing, and the extended portions were soul-searing. There is a physicality to the cello heard in close quarters, a quality not conveyed in recordings, or even live in a concert hall. One can almost see the instrument vibrate. One can certainly feel it.

When he was through, he asked me, with a smile, “Have I paid you back?”

I said we were square.

Fun, if squicky, fact: Bows are made from the hair of horse tails, but, Steve informed me, only the hair of males is used. Why? Because females, given the arrangement of their anatomy, stale on their own tails. The hair is impregnated with urine.
Posted by Joe Barron at 6:39 PM No comments: