In Lansdale, for heaven's sake. Here is my  preview article for the upcoming performance by the Choristers. I must say David Spitko is an extraordinarily ambitious choral director, and, as far as I have seen, his ambition has paid off in successful performances.

This didn't make it into the article, David told me he pays his performers scale, which results in a budget in the tens of thousands of dollars. Still, he says, he feels he must do it out of respect for their professionalism and their long training.

He should  talk to my employers.
Posted by Joe Barron at 12:59 PM No comments: 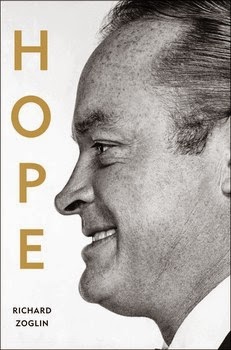 This week I finished reading Richard Zoglin’s dogged biography of Bob Hope, titled simply, Hope.
I’d been eager to get my hands on it ever since the reviews started appearing in the press, though it’s hard to explain why. I’m not a fan of Hope’s comedy (apparently no one is anymore, a state of affairs Zoglin hopes to rectify), but I do enjoy show-biz biographies, specifically those dealing with old timers from the last century. I’ve read books on Sinatra and Bing Crosby, for example, though I almost never listen to their music. I’m also a student of comedy, a holdover from my youth, when I thought I was funny.  Learning that I’m not was a long, painful lesson, but I figure if someone like  Bob Hope can be succeed trough sheer determination, the rest of us hacks  have a chance.

Zoglin tries mightily to clear a place for Hope in the front rank of the great comedians. He doesn't quite succeed. None of the material he quotes stands out, and the chapters on Hope’s peak years, which Zoglin says lasted from about 1940 to 1960, are the least interesting part of the book. Mostly, they rely on a barrage of data, primarily box office grosses, Hooper ratings, and Bob’s growing personal fortune. Far more absorbing are the early chapters on Hope’s hardscrabble childhood and vaudeville career, and the later descriptions of his protracted and very public decline. Paradoxically, Hope's greatest legacy might be that he inspired Johnny Carson and David Letterman to retire gracefully.

Zoglin’s insistence that today’s comedians owe Hope a debt for essentially inventing the modern topical monologue isn't convincing, either. Hope may have been the form’s earliest practitioner, but who would ever return to his Pepsodent or Chrysler shows for a tutorial?

I can’t add too much too the reviews that have already been published (see especially Frank Rich in the New York Review of Books), except to point out one of Zoglin's more bothersome stylistic tics. In his attempt to be even-handed – both to acknowledge Hope’s shortcomings and insist on his achievement – he writes sentences whose structure may be abstracted as “It wasn't … but,” as in “It wasn’t a very good movie (or TV special, or live performance), but it made a lot money (or got high ratings, or was well- attended, or Bob was good in it).”  In symbolic logic, this would be expressed as Not P, but Hey, C'mon, Q.

It begins unobtrusively, in the chapters on Hope’s early success:

The gag lines had more snap than wit, but Hope delivered them with crisp self-assurance, and faster than anyone else on the air.

Then, as the litany of movies and TV specials and USO tours expands, one more and more frequently comes across constructions like this:

In truth, Hope got away with plenty of old jokes – tired, knee-jerk gags about Gleason’s weight and Benny’s cheapness and Crosby’s many kids – and his material was often second-class. But throughout the 1950s his TV popularity never flagged.

And, in its late, epic form:

The shows themselves were growing increasingly leaden: tired gags, corny sketches, with Hope looking more disengaged and cue-card-dependent than ever. Variety, reviewing his 1989 special from the Bahamas, chided Hope for “permitting his team of writers to throw together such a generally dismal  collection of excuses for gags and uniformly horrible skits which could have been bettered by a reasonably talented high school sophomore.”

At this point I was actually steeling myself for what I would find after the paragraph break:

Yet the shows were big moneymakers for Hope.

Reading Hope, the question I kept asking myself was, if Bob Hope employed so many first-rate writers, as even the least sympathetic reviewers acknowledge, why are the jokes so forgettable? 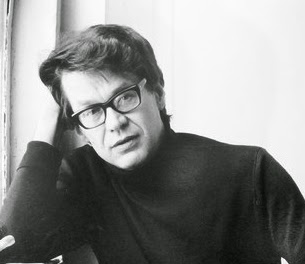 I want to take a few moments  to note the passing of Andrew Porter, the music critic for The New Yorker magazine from 1972 to 1992. The dates are important for me, since Porter began writing for American readers at the same time that I, as a teenager, was discovering serious music. I grew up on him. His lucid, poetic explanations of how compositions worked, as well as his vast erudition – noted in all the appreciations published this week – helped me to understand and verbalize what it was I found so exciting in those years.

Consider, for example, his extended description of the opening of Elliott Carter’s Symphony of Three Orchestras:

High on the violins, as one thin, shining, open-textured chord is laid upon another, in sifting aeolian strains, it seems as if the cradle of wires overhead may be sounding: “Sibylline voices flicker, wavering stream, As though a god were issue of the strings.” [The quotation is from The Bridge, by Hart Crane.] The violins span the stage from side to side. Between them,  three piccolos then break in with keen, bright bird cries, given added sharpness by high, sharp hammer beats from piano and xylophone;  clarinets and oboes swell the shrill chorus to a brief tumult … And then a single trumpet wings out in a long solo flight. Wheeling through the faint, ethereal  violin chords, it mounts, hovers, circles down, soars again, swiftly plummets, stays for a moment poised low, traces a final, sudden ascent and fall before coming to rest … A series of emphatic descending figures from the orchestra in turn ends the introduction …, and the symphonic argument begins in earnest with a huge span of sixths softly sustained by the strings of one orchestra and giocoso chattering of two bassoons from another.

That is as evocative and accurate a description of that music – or any music – as you will ever encounter. Reading it, only a few weeks after I attended the premiere of the symphony in New York, was like hearing the piece again, and for the three years before the recording was finally released, it was as close as I could get to a second hearing.

For his entire tenure at the New Yorker, Porter was the only friend Carter had in the New York press (the Times critics famously hated him), and when he finally left the magazine,  he wrote that he did so with a sense of optimism, since the Times had finally hired a critic – Edward Rothstein – who kept an open mind. Rothstein, unfortunately, didn't stay long at the music desk, and Porter’s ultimate successor at The New Yorker carried on the Times’ lamentable tradition. The more the years went by, the more I missed him, and not just for his championship of modernism.

(He wasn't a blind enthusiast, either. He could be scathing about Charles Wuorinen, and Charles Ives remained a blind spot. His essay on Ives, written for the composer’s centenary in 1974, was lukewarm and relied rather too heavily on Frank Rossiter’s critical biography. It’s odd: despite the biographical and philosophical connection between the two composers, few critics seem to like them both.)

I was lucky enough to meet Porter a couple brief times. The first was in 1988 in College Park, where he moderated a panel at the University of Maryland’s Handel Festival. (At that time, I was living just down the road in Hyattsville.)  He signed my copy of Music of Three Seasons, the source of excerpt above. My wife at the time, who had studied Russian, complimented him on his opera translations, and I thanked him for his writings about Carter. When I said I was one of the few musical laymen who admired Carter’s music, he replied, “I am very glad to hear it.”

To quote Auden on Yeats:
O, all the instruments agree
The day of his death was a dark cold day.

Doesn't matter what the temperature in London was, or whether the sun was shining.