Spent a half hour yesterday interviewing Donna Coleman, a pianist from Ambler, Pa., who now lives in Australia. She is back for the holidays (it's summer vacation down under), and she'll be giving a couple of recitals in the area this month, one of them Jan. 18 in Flourtown. Program will consist of Bach, Chopin, some classic and modern rags, and the Cuban dances of Ignacio Cervantes, and Donna will be speaking on the similarities between them and the development of one to the other.

I was excited for the chance to speak with her because she has recorded the two piano sonatas of Charles Ives, as well as several of the shorter pieces. She sounded impressed on the phone when I told her I had about dozen recordings of the Concord, though not hers. (It's now on my wish list.) Unfortunately, she had so much to say in our time together, we never mentioned Ives at all.

The article will be out in about a week.

A Happy New Year to all seven or eight of you.
Posted by Joe Barron at 11:15 AM No comments: 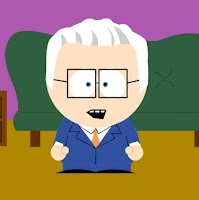 Elliott Carter as he would appear on South Park.

Elliott Carter turned 102 today, and I just can't let the occasion pass. He's my favorite living composer, as anyone who has ever met me is aware, and he stands high among my favorite dead ones as well.

I'm guessing Mr. Carter celebrated his birthday the way he celebrates every new day of his life — by getting out of bed and writing music. He is still sharp, still vital, and while it is likely his greatest work is behind him, each new piece is still a welcome adventure. Every so often, one of them, such as the excellent Nine by Five for wind quintet, premiered just last February, will recapture the power of the music from Carter's peak years, the 1960s and '70s. One never knows, does one?

If I live to his age, I'll be happy if I can feed myself.

I celebrated the way I always do — with an in-home concert. Given the richness of Carter's output, selecting the program is always a challenge. I settled on a few favorites: the Oboe Concerto and the Second String Quartet, in performances recorded for me from BBC broadcasts by e-pal and fellow Carterphile Colin Green, and for the finale, the great Concerto for Orchestra (1969) in the rip-snorting reading by Pierre Boulez and the NY Philharmonic. (The recording is available only through the orchestra, in a six-CD box set of American music. The full set cost $90 and was worth every penny for those 21 minutes alone.)

For the past couple of months, I've been listening to Bach almost exclusively, and so I returned to Carter's music "with quite fresh ears for an old man," as Stravinsky wrote in a similar context. It was an invigorating experience. And the night is still young. I might return to the stereo before it's over.

Finally, I'd like to send Carter-Day greetings to the other bloggers and chatroom lurkers around the net who have wished the composer many happy returns of the day (and how many more of those can there be?): Doundou Tchil, Mark Berry, Steve Hicken, Bruce Hodges, Karl Henning, and Paul Yin, to name a few. You are all my friends in spirit. 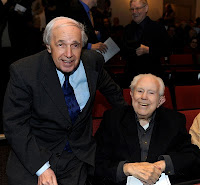 Addendum: Here is a photo of Mr. Carter with Pierre Boulez (I'll leave it to you to guess which is which) taken Dec. 6 at an 85th-birthday concert for Boulez in NYC. Thanks to Bruce Hodges. When this was taken, Mr. Carter was five days shy of his 102d birthday.
Posted by Joe Barron at 9:08 PM 8 comments: 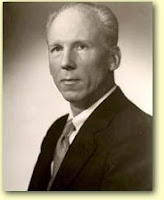 Say what you want about Messiah or the Christmas Oratorio. For me, the season doesn’t start until I hear LeRoy Anderson’s “Sleigh Ride.” And it has to be the original orchestral version, with the clip-clopping and the whip snapping and the neighing at the end — none this Johnny-Mathis-coffee-and-pumpkin-pie-by-the-fire bullshit. This year I was fortunate to hear it early — the day after Thanksgiving over a car radio. So now I’m in the holiday mood. It won’t last, so I’ll take this opportunity to wish everyone a happy (insert your holiday here).

Anderson (1908-75) was my favorite composer for a little while when I was a teenager. (Am I square or what?) I don’t listen to him much anymore, but I’ve always been grateful to him for teaching me how to listen to an orchestra at a time when no one I know was listening to orchestras. His music still occupies a little soft spot in my heart. It’s wonderful, light stuff, very catchy and tuneful — the equal, in its bouncy American way, of Johann Strauss the younger, imho.

I once had the pleasure of speaking to Anderson’s widow. I had to double check a title or something for an article, and I went to the LeRoy Anderson website and found a phone number to call for information. I called the number and left a message, and within an hour or so Mrs. Anderson herself called me back. I was stunned. We spoke for a long while, as I recall. She seemed genuinely happy anyone would take an interest in her husband’s music, and I was surprised to learn that the Andersons knew the Elliott Carters. Carter and Anderson were born the same year, both attended Harvard at the same time, and for a while they lived “right down the road” from one another, as Mrs. Anderson put it — the Carters in Waccabuc, New York, the Andersons just over the line in Connecticut.

Besides being classmates and composers, Carter and Anderson shared a talent for languages. Carter speaks French and Italian and reads German and Greek and Latin and heaven knows what else. Anderson, the son of Swedish immigrants, mastered all of the Scandinavian tongues.
Posted by Joe Barron at 2:42 PM 11 comments:

Not much to say about this, except that I appreciate the thought.