As I've said in the past, it isn't Christmastime until I've heard Leroy Anderson's "Sleigh Ride," preferably over the loudspeakers at a mall.This year, I am happy to report that I found it even before the season officially began, on the night before Thanksgiving. While driving home from work the night before Thanksgiving, I came across it on an oldies station that switches to Xmas music every year. It put me in a good mood after a long, grueling and pointless day, and it probably saved from Black Friday shoppers from being pepper-sprayed.

I've since heard it a second time, on the same station, with lyrics, sung in the familiar rock version by a girl group I can't name. You know the one, with the girls singing "ding-a-ling-a-ling-a-ding-dong-ding" in the background. Not my favorite arrangement, but it counts.

Here is a nice performance with John Williams conducting the Boston Pops:

I am also happy to announce that WGBH Boston will broadcast "A Leroy Anderson Christmas" at 6 p.m. Dec. 3 and noon Dec. 4. Leonard Slatkin will conduct, but you can't have everything.
Posted by Joe Barron at 5:49 PM 2 comments:

Bil Keane, creator of the daily comic "The Family Circus," died Nov. 8 at age 89. I was not a fan of his work, but his passing has a nostalgic significance for me, because he provided the occasion for my first appearance in print. In the 1960s, when "The Family Circus" was still new, the Sunday panel included a feature called "Sideshow." The idea was that readers (mostly kids)would send in ideas for puns, and Keane would draw a small picture to illustrate them. Three of them appeared each week. Dreaming of immortality, I sent in a suggestion, and the drawing Keane based on it (it was nothing like the one I sent) appeared in the Philadelphia Bulletin on July 23, 1967.

I still have the letter Keane sent me, which included his autograph and a printer's proof of the comic: 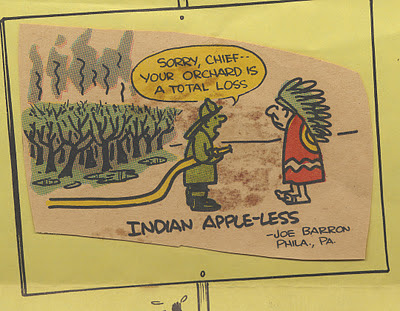 Well, come on. I was only nine.

I haven't followed the strip in many years. I came to dislike "The Family Circus" for all same the reasons most urban sophisticates do: it was insipid, obvious and not very funny. But there was more to it than that. As a former child, I also believe it failed as a depiction of childhood, or at least of any sort of childhood I was familiar with. For me, the best comics about kids — "Calvin and Hobbes," "Peanuts" in its early years, Gahan Wilson's "Nuts," and a handful of episodes of "The Simpsons" and "South Park" — depict their experience from the inside, with all the fear, cruelty, mishchief, disappointment and humiliation intact. Keane's view was resolutely external. He saw children as a particularly dense parent or grandparent would — as adorable ignoramuses whose feelings can't be taken seriously. For anyone who remembers what it was like to be a child, "The Family Circus" rang consistently false.

It was also ripe for parody, and to his credit, Keane was tolerant of the attempts to make his ridiculous little comic look even more ridiculous. I confess I was one of the culprits, for a brief. In another life, some of the people in my office would cut out the daily comic and changed the captions, usually to something involving sex, drugs, or child abuse. I saved a complete file of the desecrations. Here are a few the less offensive. As you can see, my sense of humor has darkened over the years: 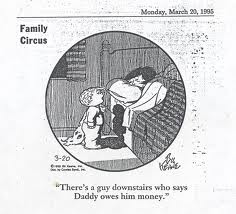 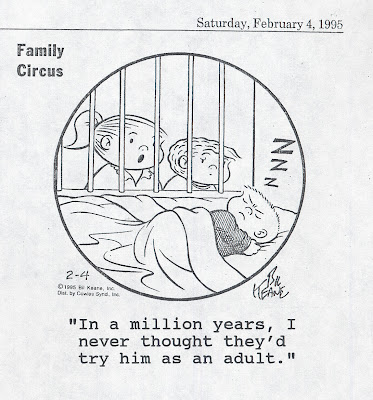 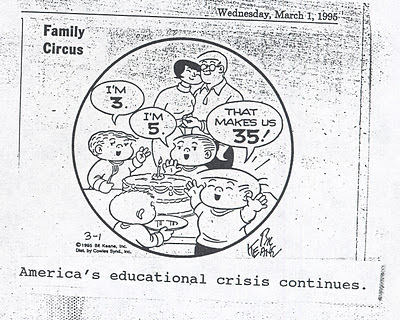 For a more inspired use of Keane's art, visit The Nietzsche Family Circus, which pairs random cartoons with random quotations from the philosopher. The weird thing is, it works. I mean, let's face it. Nietzsche was a lot funnier than Bil Keane ever was.
Posted by Joe Barron at 6:02 PM No comments: