How often do you get to hear an afternoon of Bach in a small suburban church, and for free? See my preview article at left. I was one of the sponsors: I contributed $10 and asked Dr. Schmidt to play "Wachet Auf," BWV 645, or whatever the number is. I'm excited about this one. It's going to be my birthday present to myself.

Yes, my birthday falls on Halloween, which was the best possible day for a kid. You got the presents, the cake, ice cream, the candy, and the dress-up, and, if you went to Catholic school, Nov. 1 was a holiday — All Saints Day — which gave you time to nurse the chocolate hangover.
Posted by Joe Barron at 5:54 PM No comments:

Lyric Fest and The Crossing will present an all-Barber program in Philadelphia this weekend. The program will be given twice, once in Chestnut Hill and again in Center City, and it will consist entirely of songs and choral music. I'll be going to the Chestnut Hill concert Saturday evening. This is exciting. Good choral concerts are rare, particularly when they're devoted to a single composer who I always felt has been somewhat underrated. Barber is known primarily for his Adagio for Strings, of course, and his piano and violin concertos are very fine, but his vocal music, some of his best work, seems to get overlooked. Or maybe I just haven't been looking in the right places.

See my preview article, linked over to the left.
Posted by Joe Barron at 12:53 PM 2 comments: 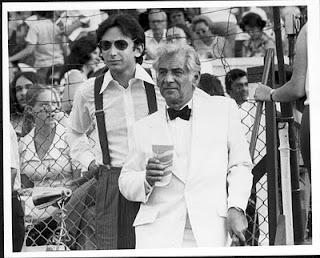 Leonard Bernstein and Michael Tilson Thomas in Danbury, Conn., 1974. I was there, too, though you can't see me in this picture.

Leonard Bernstein died twenty years ago today, Oct. 14. Bernstein's son Alexander wrote this tribute to commemorate the anniversary. The link was sent to me by Elliot Tomaeno of dot429.com, a website designed, in Elliot's words, "specifically designed to help lesbian, gay, bisexual and transgender professionals connect with other LGBT professionals." Thanks, Elliot. Always glad to help.

I appreciated Bernstein more as a conductor than as a composer. (West Side Story is a great score, but oh, it's a bad movie.) I particularly value his recordings of Nielsen, which I still have on vinyl. For all of his public exposure, however, I saw his conduct only once, at the Danbury, Conn., State Fair Grounds in 1974, at a concert celebrating the Ives centenary. I was sixteen years old. Bernstein led the American Symphony Orchestra (I think), in Ives's Second Symphony. Unfortunately, he was not at his best that night. It was a pretty ragged performance, as I recall, and I don’t think it was the musicians' fault, since Michael Tilson Thomas conducted the second half of the program, and for him, they were spot on. Lenny seemed more interested in dancing round the podium than in actually leading the orchestra. At one point, he actually jumped into the air. The motion seemed particularly inappropriate, since nothing much seemed to be happening in the score at the moment. The spectacle left rather a sour taste in my mouth.

But everyone is entitled to an off night, I suppose, and Bernstein's recordings of Ives's music are quite fine. Elliott Carter also has expressed approval of Bernstein's recording of his (Carter's) Concerto for Orchestra, a score he (Bernstein) did not particularly like, or so I understand. A pity, since it's a great piece of music. Perhaps if he had gone back to it, rather than leaving it to Boulez, he might have developed a greater appreciation for it.

Today, the Danbury Fair Grounds are a shopping mall, like every other piece of open land in America.
Posted by Joe Barron at 1:54 PM 2 comments:

But what is 'English' about them?

I've been listening to Peter Watchorn's beautiful recordings of Bach's English Suites (Ti-254) for the past few days. The suites are early Bach, dating from the Weimar period (like dates of composition 1709-1717, according to the booklet), but they're not nearly as flashy as some of the organ music he was writing around the same time. As collections of dances — sarabandes, gavottes, bourees, etc. — they prefigure the suites for solo cello cello and the partitias for solo violin. Some like their Bach "white hot," to use a favorite expression of one DJ who has made a specialty of Bach, but what I like about these performances is how intimate and, well, comforting they are. Watchorn's harpsichord sounds like rain pattering against the window on a gray afternoon.

Postscript to my remarks about Marja Kaisla's performance of the Emperor Concerto last Sunday: It struck me sometime this week that the best word to describe her playing is "creamy."
Posted by Joe Barron at 1:20 PM No comments:

Some people don't know what they're missing

I know, I know, it's a losing game to lament the small attendance and classical concerts, but I'm going to do it anyway. Last night I attended an unexpectedly wonderful concert: I say unexpectedly because it was a fundraiser, held in a church hall in Abington, Pa., with a volunteer pickup orchestra and two local pianists. The program consisted of a short Schubert overture and two, count 'em, of Beethoven's piano concertos -- the Third and the Fifth. Claire Belkovsky, the soloist in the the Third was fine, but Marja Kaisla, the soloist in the Fifth, was astonishing, and while the orchestra was small and had only one short rehearsal, it played beautifully and crisply, especially in the Emperor, and the sound was more than big enough to fill the modest performance space. (Winds and brass were up on the stage, strings and soloists down on the floor.) It was a night to remember, a night to write home about, if you were away from home, a night to blog about, but the attendance was only about 75, and I recognized most of the people there. They were the same ones who always come to these fundraisers, which are held to benefit the Sheldon Harris Ginsberg Memorial Scholarship Fund at Philadelphia's Settlement Music School.

I understand it was a Sunday night, and the Eagles were playing the Redskins, but I'm going to be up from this concert for the next couple of days. I just wish other music lovers in the area could understand what they missed. My thanks and congratulations to Claire, Marja, conductor Blair Bollinger, all the folks in the orchestra, and as always, to Renee Goldman (that's pronounced REE-nee), friend and former piano teacher, who organizes these things every year, in the face of public indifference, to keep her brother's memory alive.

So the next time I write an article telling you you to come to a concert, for heaven's sake, come. I feel sorry for everyone in the world who wasn't there. And I especially feel sorry for the people in Abington who could have walked over.
Posted by Joe Barron at 1:52 PM No comments: