Cycled out to Valley Forge,
Where Friedrich breakfasted with George,
Relishing, with Prussian zest,
The Continental sausage fest.
Posted by Joe Barron at 10:25 PM No comments:

The worst advice ever given to a creative artist

Thinking of Charles Ives and the hostile reaction his music has weathered from so many professional musicians,  I'm reminded of his confrontation with Elizabeth Sprague Coolidge, the great music patron, as recounted in Jan Swafford's Chareles Ives: A Life With Music (p. 220). As Swafford tells it, Coolidge visited the Iveses in at their summer home in Redding in 1915, and Charlie tried out "Saint-Gaudens" and "Washington's Birthday" on her.

"Mrs. Coolidge listened sourly," Swafford goes on, "deplored the awful sounds, and finally walked out of the house. As she got into her motorcar she fired a parting shot: 'Well, I must say your music makes no sense to me. It is not, to my mind, music. How is I that -- studying as you have with Parker -- you never came to write like that?  You ought to know the music of Daniel Gregory Mason. He has a real message.' "

Lately I've been obsessed (in a healthy way, I think) with Mozart's E flat Piano Concerto K. 271, and this morning I received in the mail my third recording of it, which cost one cent at Amazon, to the benefit of Goodwill Industries of Middle Tennessee. It is Alfred Brendel's last recording, of three, with Charles Mackerras conducting the Scottish Chamber Orchestra. I am listening to it at this moment. Ladies and gentlemen, this is The One.

This is the sort of music -- and performance -- that almost succeeds in making life bearable.
Posted by Joe Barron at 12:11 PM No comments:

The slug on my wall 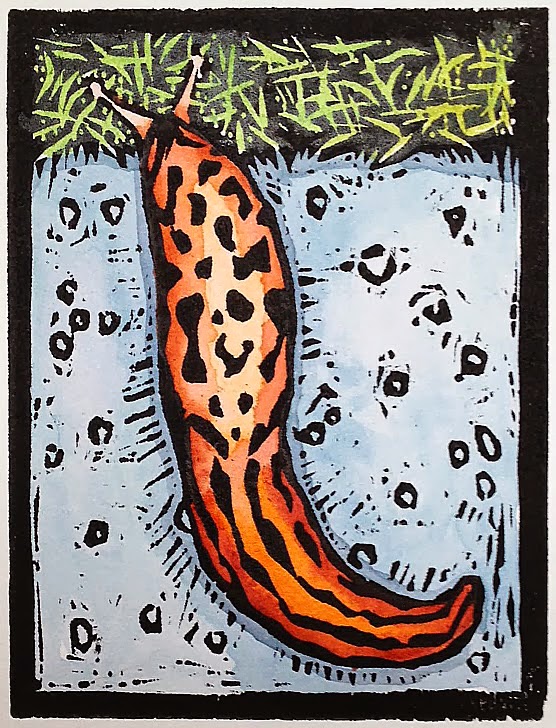 Sunday I biked to the Morris Arboretum where Martha Knox was selling her woodcuts at an art show. Just to show my support, I purchased a copy of "Leopard Slug," a small, hand-painted piece I believe is from her series "In My Yard." Today I put it in a two-dollar Ikea frame and  hung it on the wall above my desk. For such a small picture, it adds a surprising and wonderful dash of color to my living room. I thought I was being quirky when I picked it out, but Martha tells me it's actually one of her more popular works. I can see why. Everyone loves slimy invasive species.

The bike trip to the arboretum was a killer. I was fine when I stuck to the Schuylkill Trail, but Harts Lane in Whitemarsh was a steep  climb on the order of "the wall"  Manayunk. At one point I had to get off the bike and walk, and at several others I had to stop and catch my breath. When I returned home, I lay down on my bed and didn't move for close to  two hours.
Posted by Joe Barron at 9:51 PM 7 comments: 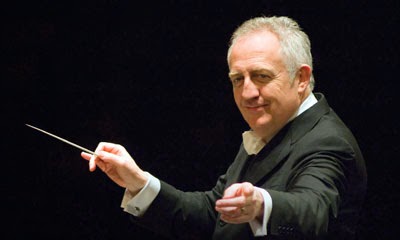 Bramwell Tovey will conduct the Philadelphia Orchestra in Beethoven's Ninth Symphony at the Mann Center on June 27. I won't be able to attend, because my work schedule won't allow it, but I did manage to score a brief phone interview. The resulting article may be read here. I'm not responsible for the headline, by the way, which should say he will conduct Beethoven and Britten, not perform them.

Tovey was born and raised in Britain, and he resides mostly in British Columbia, where he is the music director of the Vancouver Symphony. I must confess I had not heard his name before I accepted the assignment to write the article, but I found him to be a genial interviewee with plenty to say. He also had a good sense of humor, which I rarely expect from a jet-set conductor and composer. He chuckled when I asked, in regard to his opera The Inventor, whether Ottawa enforces the same Canadian content regulations for music as it does for TV and radio. It doesn't, apparently. No one in the government contacted him about the work, although part of it does take place in Halifax.
Posted by Joe Barron at 9:20 PM No comments:

Jeremy Denk has written a sympathetic and characteristically chatty review in the the New York Review of Books of Stephen Budiansky's new biography of Charles Ives, which I've read. I'm not sure who this Ransom Wilson is. I don't remember him from the book, he doesn't appear in the index, and it was the critic Tim Page, not Wilson, who, according to Budiansky, dismissed Ives as a "basement tinkerer" who knocked out "ditties" on Sundays (p. 15). (So, the Fourth Symphony and the Robert Browning Overture are "ditties." In thinking of those pieces, and so many more, the word never would have occurred to me.)  I suppose Denk went back to the article in the New York Times Budiansky cites in his notes and found Wilson's name there. In any event, I have never heard of him, and I imagine Ives will be remembered and argued about long after he and Tim Page are forgotten.

I'm also puzzled by Denk's statement that "Ives's music often falls flat in performance." I have heard many performances of Ives that were far from flat -- among them Denk's own, with Soovin Kim, of the four violin sonatas. It was such a wonderful evening I recall it easily after seven years -- though I am still not sold on Jeremy's recording of the Concord Sonata.

I'm note sure, either, how high the Concord towers over Elliott Carter's Piano Sonata. My own feeling in comparing the two (since you asked) is that Carter, overall, is the more accomplished, but there are moments in Ives -- for example, "Hanover Square North" -- that take me places no other composer since Beethoven has ever taken me. (Jeremy also has an irritating habit, somewhat common among Ives partisans, of making the case for Ives's greatness while at the same time backhandedly slighting  the music.)

I recommend anyone with an interest in Ives to read Budiansky's book. He's particularly good on the composer's health problems, and, mercifully, he avoids the imbroglio over the dating of Ives's compositions. (Maynard Solomon is never mentioned.) If I had a complaint, it would be that perhaps he spends too much time on the insurance industry and the  treatment of diabetes. Biographers seem to feel obligated to put all their background research on the page. If it stands out more in this book than it might in some others, however, it does so because the book is so admirably concise.
Posted by Joe Barron at 8:50 PM 5 comments:

My humanist friend Martha Knox, a mother and woodcut artist who recently spent some time in the  the hospital for a gallstone, celebrated her 36th birthday yesterday. The day before, on her Facebook page, she specifically asked her friends not to give her the standard saccharine greetings. She wanted edgy, she wanted cynical, she wanted insulting. I couldn't quite make myself insult her, but I did come up with this.

We celebrate, for what it's worth,
The day of Martha Knox's birth,
And raise a song, in dulcet tones,
Of purple hair and bladder stones,
Of butterflies on blocks of wood
And humanistic motherhood,
With healthy snacks and wholesome games
For daughters with outrageous names,
Knowing as we do full well
Her soul headed straight to hell.

Posted by Joe Barron at 9:44 PM No comments: