The chamber recital this weekend by The Fine Art Music Company demonstrated just how fruitful thematic programming can be. Take a simple concept ― in this case, “A Musical Ode to Earth” ― and in a little while, pieces that otherwise might never share the same hour begin to present themselves. As the performances rolled by yesterday at the Ethical Society of Philadelphia, I could almost taste the excitement the Rollin Wilber and company must have felt in making their selections. 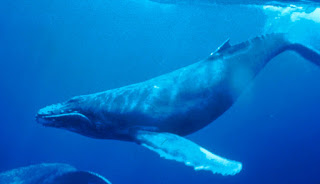 It was an eclectic list, certainly, though grounded firmly in the 20th and 21st centuries. The first half began with Henry Cowell’s “Tides of Manaunan,” one of the composer’s early experiments in tone clustering (written in 1914 when he was, incredibly, just 17), and ended with George Crumb’s exquisite Vox Balaenae, performed, as the score requests, in deep blue light with the performers wearing masks. It was an inspired juxtaposition, since Cowell pioneered the expansion of piano technique that Crumb later used to much more expressive effect. The low lighting and Lone Ranger-style facial gear must have interfered with the musicians’ ability to follow the score, but flutist Elivi Varga, cellist Julia Morelli, and pianist Katarzyna Marzec-Salwinski brought it off flawlessly. The finale achieved a genuine feeling of timelessness and otherworldliness, despite the intrusion of a police siren outside.

The other highlight of the first half, for me, was Katarzyna’s crisp rendition of Debussy’s prelude “The Terrace of Moonlight Audiences.”  In the second half, too, Rollin was as good as I’ve ever heard him in Ernest Bloch’s “Poems of the Sea” for piano. 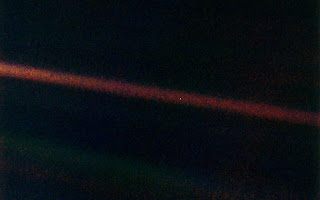 The brief afternoon ended with the famous video of Carl Sagan speaking about the “pale blue dot” of Earth as photographed from the far reaches of the solar system by the Voyager spacecraft, followed by the music it inspired, David Ludwig’s Pale Blue Dot for string quartet. For me, the Ludwig was not as evocative as the Crumb, but I loved the soft, haunting way it ended, with the players tapping on their strings with small stones.

The program also included a pair of short works by the tragically short-lived Lili Boulanger, and, as a short break from the afternoon’s theme, Jacques Ibert’s Two Interludes for piano, violin and voice.