Essays After a Sonata

For the past few weeks I've been living with Kyle Gann's new book, Charles Ives's Concord: Essays After a Sonata, an exhaustive study that combines literary history, musical analysis, and aesthetic philosophy. It's an endlessly fascinating resource and a book I'll be returning to often. 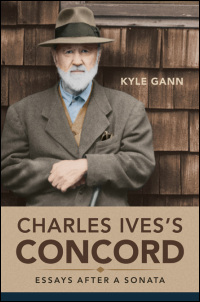 Analyzing a favorite piece of music is, for me, rather like describing a mental state in terms of neural activity. It's necessary, I suppose, but does little to capture the quality of the experience. As detailed and daunting as Gann's vivisections can be, however, they do us the service of exposing the planning and intelligence -- the artistry, if  you will -- that Ives lavished on his Second Piano Sonata. The underlying unity if a composition is "not a selling point that would have impressed Ives," Gann says. Still, it impresses me. And although Ives downplayed the value of form -- what he would call "manner" -- in evaluating a work of art, it is also true that after self-publishing the Concord in 1920, Ives devoted the better part of three decades revising, editing, and tweaking the score until he arrived at a form that satisfied him. And even then it didn't, quite.

Gann's chapters on the Essays Before a Sonata, the short volume Ives published as a companion to the Concord, are more fun, though less essential to understanding the music, and they go a long way toward rehabilitating Ives as a thinker and prose stylist. Ives was not the first to judge art from a moral standpoint, or in terms of a fundamental duality. In both respects, Gann argues, he owes a large, mostly unacknowledged debt to John Ruskin. Gann admits, however, that "in the end, Ives's treatise on substance and manner may have to remain for us, no practical typology or description." In other words, it doesn't offer much of a guide on the best places to spend our entertainment dollar. To my mind, dualisms like substance and manner can create a useless diversion, entangling the listener in endless parlor about which pieces conform to the standard and which don't. They also deny us our right to determine our own response to a work of art. A song or a symphony may be enjoyed for any number of reasons, no one of which is to be deeper or more authentic than any other. To paraphrase Ives's father: Don't pay too much attention to substance. If you do, you may miss the music.

I've listened to the Concord Sonata countess times over the years, and I've seen it performed live more often than any other piece. Now I'm hearing it again with fresh ears, picking out details that had grown almost inaudible through repetition. I am grateful to Gann for reintroducing me to a piece I thought I knew well, and for loving Ives as much as I do.

(I should also mention the book includes a concise, helpful chapter on Ives's First Piano Sonata, a remarkable work that is often overlooked beside the Concord. This week,  I listened to it again, in Donna Coleman's fiery recording, and with Gann's notes in mind, I was able to navigate its conflicting cross-currents without once losing my bearings.)
Posted by Joe Barron at 5:03 PM