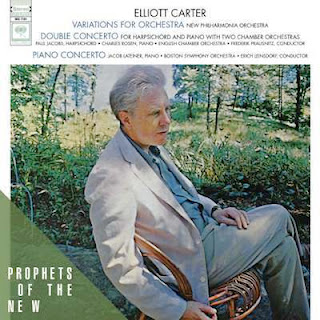 John G. writes:
I thought you might like to know that the first (LP) recording of the Carter Piano Concerto (Lateiner / Leinsdorf / BSO) was released last May by Sony, as part of a five disk set titled Prophets of the New. The set is already unavailable, but each of the disks can now be had, individually, from ArchivMusic. And the Carter CD is well worth having. It features the Prausnitz recordings (originally Columbia; 1968?) of the Variations for Orchestra and the Double Concerto, together with the inaugural Lateiner performance of the Piano Concerto (originally RCA). All three of these performances are worthwhile, but for my money it is the Piano Concerto that steals the show. As I remembered, this account is slower than all of the recorded competition, and it pays off. The Boston winds and solo strings are stunningly eloquent; the byplay among them and the piano is much more telling here than in any other recording. And Lateiner! He makes every note expressive, and the whole comes vividly, tremblingly to life (for me) as in no other performance to date, including the Rosen one. His account of the "poetic musing" of the opening phrases is just right, and sets the tone for what follows.

Have a listen. I'd be curious to know whether or not you agree with me.

If only some gifted pianist with a sufficiently high profile would champion this score, surely one of the greatest of the last century. Like so many of the Carter's orchestral pieces (even now), it is not performed remotely as often as it should be. Oh well.

I was not aware of this release, but I've had the original LPs for more than 30 years, and I ordered my copy of the CD immediately. I must say I've never shared John's admiration of the Lateiner/Leinsdorf/BSO recording of the Piano Concerto — I never really turned on to the piece until I heard Ursula Oppens' recording with Michael Gielen and the Cincinnati Symphony — but I promise to give it my full attention again once the CD arrives. The Columbia LP of the Variations and Double Concerto, with Prausnitz conducting, was the first Carter recording I ever owned, and it is still a favorite. There are no better recordings of either piece (and I love the photo of the composer on the cover). I urge any of you who have not heard them to grab the CD while you can.

In other news, I have just learned that Leon Botstein will conduct the American Symphony Orchestra in an all-Carter program at Carnegie Hall on Sunday, November 17. I am already counting the days. The program will include the early Pocahontas and the great Concerto for Orchestra. There is some question out here in blogsville over whether Botstein is up to the task. He's an ambitious, knowledgeable follow, but not an especially inspired interpreter. Still, it's the Concerto for Orchestra, for heaven's sake. John G. writes that he heard Botstein conduct the piece about ten years ago, and, in his words, it wasn't half bad.