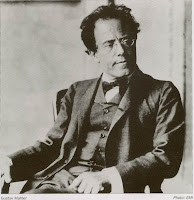 Today, July 7, is both the 150th anniversary of the birth of Gustav Mahler and the 70th birthday of Ringo Starr. Hard to say what they have in common, other than the day and the fact that both are quite important to me. Ringo was my favorite Beatle when I was a kid, though largely by default: I have a brother and two sisters, and they got to the other three Beatles first. The group's appearance on the Ed Sullivan Show in 1964 is one of my earliest memories, and for the next couple of years, they were everywhere ― on the radio, on TV, in magazines and in all the souvenir shops on the Atlantic City boardwalk, where you could buy buttons and beach towels with their likenesses. (I want to say T-shirts, too, but I can't recall at just what point in my life the T-shirt craze took off.) It is difficult to recreate the total mental saturation we experienced to anyone who hasn't gone through it, but it makes the Michael Jackson phenomenon look like an afterthought. 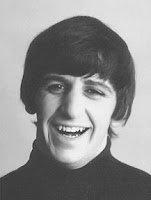 The Beatles broke up when I was 12. I lost interest in them, moving on to classical music in high school. I rediscovered them through a friend in college, however, interestingly around the time I discovered Mahler, through other friends. In the long run, Mahler has been more important, though I must confess at first he left me rather cold: the extreme length, the heavy introspection and the constant shifts in tone bored me, until one night, as a college freshman, I forced myself to listen to Bernstein's recording of the Resurrection Symphony twice in one night ― and I mean really listen. I've been a convert ever since.

Haven't been listening to much music at home since this last big heat wave struck, but when I have a moment I'll have to go back to Songs of a Wayfarer, with "Matchbox" as an appetizer. (Ringo on vocals, which was rare, but always a treat.) You’d think they couldn’t be more different, but they draw from the same bottomless well of inspiration; men, women, unfulfilled love, pain. Two twenty-three year olds, born 80 years apart, were singing the blues.
Posted by Joe Barron at 11:48 AM

Nice post! Surely that Starr-Mahler mashup is around here somewhere...

Seriously, one of my guilty secrets: I was never much into the Beatles (except for the film, "Yellow Submarine") although I fully acknowledge their status in the music world. But nice that Ringo made it to 70. I wish George and John had been given that opportunity.