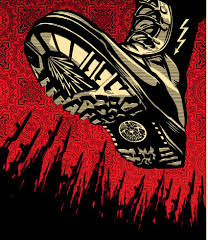 My librarian tells me there has been a run on dystopian novels of late. The most popular is, of course, 1984, with Margaret Attwood's Handmaid's Tale also high in demand. The reason isn't hard to discern, unless you've been on an interstellar flight for the past year, and I won't befoul this site by mentioning any names. For my most recent foray into the genre, however,  I went back a little further in time to The Iron Heel, by Jack London, which seemed to me more pertinent to our current situation than Orwell's projections regarding Stalinism or Atwood's world of sexual slavery.

For The Iron Heel imagines life under the Oligarchy -- what we today would call the "1 percent." London writes from an unapologetically Marxist perspective, complete with a long chapter on the theory of surplus value, and what he describes is the last stage of capitalism, a state of affairs that begins in the early 20th century (the book was published in 1906) and lasts for three hundred years. In his telling, wealth has flowed to the top, just as it is doing now. The industrial trusts, which were real enough in London's day, achieve maximum efficiency through the "combination" of production and distribution, driving small manufacturers and independent farmers out of business, until nothing is left except the big corporations and the wage slaves who toil for them. Order is maintained through control of the courts and legislatures, as well as a private army known as the Mercenaries.

The story is told by a bourgeois-turned-revolutionary named Avis Everhard, who is writing in the early 1930s (15 years after London died), but whose manuscript is being published 700 years in the future, about 400 years after the successful socialist revolution that establishes the worldwide Brotherhood of Man, This dual time frame allows London to insert retrospective editorial footnotes that comment on contemporary working conditions, pass judgment on historical figures or explain slang that readers in the far future would find archaic.

It's a promising conceit, but the execution doesn't quite come together. The hero of the book is Avis' husband, the gabby socialist leader Ernest Everhard (what a wonderfully phallic name), who in the early going is an expository know-it-all, but who drops out of sight in the climax of the book, only to take a bow in the penultimate chapter. (When he's not talking, London can't think of anything for him to do.) For me the most appealing character was old Bishop Moorehouse, who is committed to an insane asylum for daring to follow Jesus's example and minister to the poor. He too pops up again near the end, but only for a line, and to no real purpose.

In keeping with London's attempt at verisimilitude, the "Everhard manuscript" is incomplete. It cuts off in midsentence, as if Avis had to run out of the room to avoid arrest, leaving the editor to comment, in the last footnote, that we might never know how, exactly, Ernest met his fate.

Damn you, Jack, You couldn't add another fifty pages?

On the other hand, the climax of the story, the revolt in Chicago, is probably the most exciting thing I'll read all year.
Posted by Joe Barron at 11:51 AM No comments: