I can't let too much time go by before I post something about the music I heard over the weekend. On Sunday, my friends at the Fine Art Music Company presented yet another well-thought-out and captivating program of chamber music -- this one consisting of works by Robert and Clara Schumann and their discovery Johannes Brahms. Then, on Monday night, I was invited to Opus Piano, on Ridge Pike, Philadelphia, where violist Adelya Shagidullina, who also appeared in Sunday's program, and pianist Kasia Marzec-Salwinski (whose husband, Piotr, owns the piano store) ran through a program they'll be playing Wednesday at the Rutgers campus in Camden.
I don't want to get bogged down "reviewing" either event. I want to say only that I feel musically sated at the moment, as well as grateful, and that it's been only in the past few years that I've learned to appreciate early Brahms. Over the years, whenever I've been on the mood for Uncle Johannes -- which I am, frequently -- I usually choose something middle to late, say from the symphonies onward. Over the weekend, I was reminded just why that is. Fine Art wrapped  up its concert Sunday with a fiery performance of the early Piano Quartet in G Minor Op. 25, and on Monday, Kasia and Adelya played his E-flat Viola Sonata Op. 120 No. 2. Now, Brahms is always recognizably Brahms. He's one of those composers who, like Bach, did not radically alter their language in the course of their careers, but as a young man, he stuffed his scores like sausages. There's so much going on, and the textures are so thick, I often feel the need to come up for air. Sunday's Piano Quartet was certainly exciting, and it brought the sizable audience to its feet, but the sonata Monday evening let me breathe.

The young firebrand impresses me more and more, but it's the bearded, portly and dirty old man who warms my heart.
Posted by Joe Barron at 12:03 PM No comments:

Yes, it was everything I thought it would be. The gifted young cellist Steve Kramer played three of J.S. Bach's six Suites for Unaccompanied Cello -- Nos. 1, 3, and 6 -- Sunday afternoon at the Centre Theater in Norristown. It was the first of a series of chamber concerts planned for the first Sunday of each month, and the project couldn’t have gotten off to a more auspicious start.

Only about a dozen people turned out, but they were enthusiastic, and most were knowledgeable. The group included a music teacher, a family with a small daughter, and a young volunteer firefighter who said he was taking a course in classical music at Montgomery County Community College. I was flattered to speak to three people who said they learned about the concert from my preview article, which appeared on the front page of last Friday's Times Herald.

But enough about me. The music was thrilling. Steve seems to favor extreme tempi: The fast movements were very fast, and the slow movements, especially in the minor-key Suite No. 5, were lingered over, caressed. As you can see from the photo, I was sitting close enough to see the strings vibrate on the cello. In an intimate setting like this, the low growl of the instrument seems to flow through your bones.

In such an informal setting, ordinary concert protocols were dispensed with. There was no printed program, so Steve named each movement before he played it. The audience also applauded lightly between movements. The effect was a break in the continuity of the music, but that was easily forgotten during the actual playing.

Since the Suite No. 5 ends somberly, Steve sent everyone home with for a brisk encore -- "The Star-Spangled Banner," in honor of his adopted homeland, or perhaps Phillies spring training. It was the loveliest arrangement of that overly familiar tune that I can recall.

One personal note: During some extemporaneous remarks about his role at the Centre Theater Music School, Steve used the expression "don't paint the devil on the wall." He is only the second person in my life I have heard say that -- the first being my mother, who died in 1999. When I was a kid, she often said it as a way of warning not to invite bad luck by talking about it. I so taken aback when I heard again it again yesterday that I actually clapped my hands to my face. Steve is from Denmark, and my mother's mother's family was from what used to be known as the Sudetenland (the region Hitler and Chamberlain haggled over in Munich). I'm sure now that there's a linguistic connection. Mom never told me where she hear it first (or if she did, I have forgotten), but I'm sure now she must have picked it up her mother.
Posted by Joe Barron at 12:50 PM No comments: 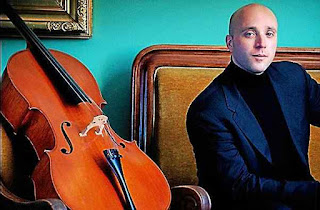 The cellist Steve Kramer will perform three of Bach's cello suites Sunday in Norristown. Here's a link to my article previewing the event. It was written for a general readership, so there isn't too much about the music. Yes, the guy on the theater board is really hoping one day to bring a symphony orchestra to the county seat. That's an expensive proposition, and I doubt it'll happen, given the theater's limited resources, but a series of chamber concerts is exciting enough.